Butch Heroes by Ria Brodell is a collection of paintings of masculine women who loved women whose stories were preserved in history. You can buy the collection in a lovely hardcover format—for ordering information start here.

Brodell designed her paintings to resemble Catholic holy cards. This isn’t a format that is familiar to me because I’m not Catholic, but I still very much enjoyed the presentation.

Many of the historical sources of information about gender-transgressing women were court documents which record punishments for women who were caught breaking the laws of the time period. Brodell’s portrait collection offers a mixture of presentations of these women, sometimes showing them in their prime, standing confidently and looking steadily into the “camera” without shame, while others show them in their moment of pain as the violent hand of the law came down on them. It’s difficult to look at the violent ones, but they tell the truth of what women endured in order to dress as men and marry other women.

Beside each painting is the information recorded about the subject’s life, and the stories are all extraordinary.

I love that Ria Brodell decided to illustrate the historical butch women that lesbians look up to. We’ve read about them in libraries, gazing in wonder at printed text in aging volumes, knowing they are our ancestors, but we’ve never before been able to look upon their (imagined) faces and see their strength and poise and share in their struggles.

This was an absolutely wondering project to take on and I’m very grateful for it.

My personal favourite is the portrait of Mary East aka James How with her wife. The painting shows two women pausing during an ordinary day at home, Mary wearing men’s clothing and looking the part of the husband. This one in particular helps me to imagine the lives of other women, who surely existed, who did the same thing as the women in these records but without getting caught, and who lived a happy life with a female partner without meeting a violent end. And of course, even those women who were executed for their choice to live their own truth had years like this, joyfully living the life they wanted in disguise as a man with a woman partner by their side. 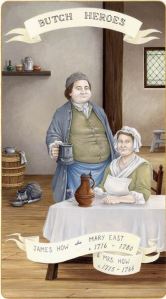 I recommend this book for every lesbian’s collection. To see more, follow this link.

This is my first short story, Cliffside Trail Adventures! It has a bit of adventure and a bit of humor, and it has a lesbian main character although it’s not a romance. Terri, a workaholic graphic designer, goes to a team-building day with her staff. She thinks the day will be a lame and easy break from work, until unexpected things start happening…

Chapter one of The Safe Sea of Women by Bonnie Zimmerman is about how lesbian culture shapes the novels we write. What I found most interesting is her discussion of myths. Zimmerman defines myths in a full paragraph, using some wording taken from Mircea Eliade’s writing. Here are some of the elements of myths:

Zimmerman pointed out some of the myths that have been presented in lesbian novels. For example, in The Well of Loneliness, the Christian myth of origin is retold in the character of Stephen Gordon. As Zimmerman writes,

“Sinning against both heaven and earth, Stephen Gordon is barred from her ancestral home by the avenging angel, her own mother. She becomes first an exile and wanderer until, through love and suffering, she is redeemed, even becoming a veritable Christ-figure” (p30).

I read The Well of Loneliness recently, and I certainly noticed the reverence that the protagonist felt toward her family’s home, and the loneliness she felt when she was banished, but I didn’t connect this to the Christian myth. Now that I’ve seen it, it’s definitely obvious and effective. Gordon’s childhood home, Morton, is like the Garden of Eden from which she has been expelled for her sins, and she is left to wander around in misery until her death. She tries to redeem herself by pushing away her lover in the hopes that her act of martyrdom will give Mary a better life with a man. Although I wouldn’t necessarily compare this to Christ, there is an element of sacrifice and redemption.

Important to the Christian origin myth is the idea of eating an apple and thus becoming a sinner and being exiled from the Garden. Writers don’t have to stick with the idea of homosexuality as sin, however. Zimmerman refers to a novel called Angel Dance in which the Fall was engineered by Eve as a way of leaving Adam. Some writers have presented lesbian origin myths in which women are in a heavenly state of harmony with each other until something begins to divide them. Early matriarchal societies provide an excellent setting for such a lesbian-centric Garden of Eden.

I’m pondering the idea of “eating the apple” being similar to the moment of realizing one’s sexual orientation. The young child is innocent of such things, and at some point along the way she realizes who she’s attracted to. The first romance is the moment of “tasting the forbidden fruit,” and after that comes exile from the comfort and normalcy of childhood, and a journey through uncertainty. The question that the lesbian writer has to answer after that is “What does paradise look like when she finally finds it?” The “paradise” that lesbian writers describe will likely be the joy of settling down with one’s true love, or finding a vibrant lesbian community, or both.

A common storyline in any fiction is the hero and his quest.

“The lesbian hero, a stranger in the strange land of heterosexuality, sets out on a difficult adventure that eventually brings her home to her lesbian self and the lesbian community” (p31).

In this way, the lesbian-hero-on-a-quest theme is the opposite of the exile from the garden: instead of being born in a seemingly perfect world and falling out of it through sin, the lesbian hero is born in a hostile world and journeys toward a better one.

As a person who is interested in myths and fairy tales, this idea really resonates with me. I love a good hero story and I love a quest, and if that quest results in the paradise of happy lesbian love then it’s all the more rewarding.

Some of the lesbian novels I’ve read lately have presented characters who are on a journey during which they help other women they meet along the way. It’s particularly gratifying to see a character whose journey toward lesbianism lifts up other women around her.

As I read further into The Safe Sea of Women I keep finding more reasons why I’m really glad I stumbled upon this book. I was actually in a bookstore looking for The Well of Loneliness and I happened to discover this one while browsing the lesbian section. The Goddess must have planted it there for me and then led me to it!

The thoughts I’m having now about my work-in-progress are related to what lesbian myths I want to create with my story, and what other characters can be helped and uplifted as a result of my characters’ quest toward lesbian love.

I was very fortunate to come across Bonnie Zimmerman’s book The Safe Sea of Women, (1990), which contains essays on lesbian fiction, with a focus on stories written from 1969–1989. The book is full of interesting and thought-provoking information about the history of lesbian fiction, and I hope to get into lots of discussions about it. This first post will be about defining lesbian fiction.

Zimmerman names some elements that make lesbian fiction what it is, although, as she notes, it’s impossible to create a clear-cut definition when the community itself is often in disagreement.

Stories that count as ‘lesbian fiction’ have the following characteristics:

I loved reading Zimmerman’s explanation of all these points because I completely agree, and this is why I fell in love with lesbian fiction. I’ve never been particularly moved by stories written for a general audience that happen to have a lesbian character. Such stories are only as satisfying as any other ‘regular’ story. However, a story written by a lesbian that puts love between women front and center in a way that affirms lesbian existence is satisfying on a whole new level. It’s comforting like a hot mug of tea on a cold morning, and it’s validating in a powerful way, because it’s seeing your own desires reflected in someone else’s words.

In addition to the points above, my little ‘test’ for what makes a lesbian novel is this: if you had a friend just coming out and struggling with things like loneliness and homophobia, what books would you send her to cheer her up? I’d want to send her something written by someone who knows her feelings and will reflect them back to her using characters who are the heroes of their own story. A general audience book with a minor lesbian character just won’t cut it.

Welcome to my new blog, and please join me on my journey into the world of lesbian fiction. My next post will be about lesbian mythmaking.